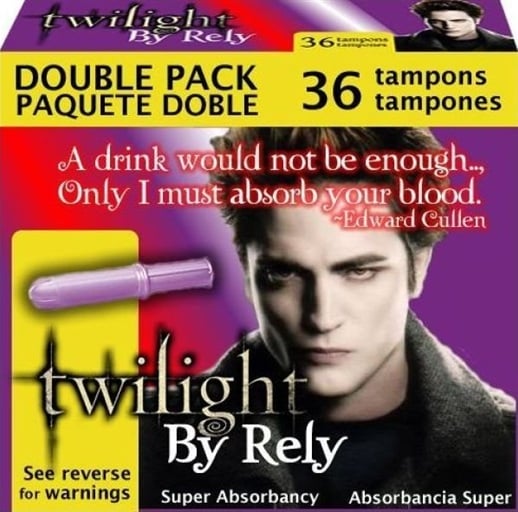 The geniuses behind Twilight have decided to squeeze the last bit of blood from the franchise by launching a line of feminine hygiene products featuring the characters from the series.

The company specifically hopes that the Edward Cullen line of super absorbment tampons will be a hit with the ladies. The tampons will feature a picture of Edward on the cover with the beautifully romantic saying “A drink would not be enough… Only I must absorb your blood.” If that were not enough the tampons come with a fang shaped applicator.

“It feels like Edward is drinking my menstrual blood… so romantic!” exclaimed Deborah Gibson a 34-year-old housewife from Akron Ohio, and part of the Twilight tampon test group. “I use to dread my monthly visitor now I look forward to it. Once a week every month I get to feel like Bella. It is amazing!”

The company hopes to have the Twilight tampons on shelves nationwide by the end of July.