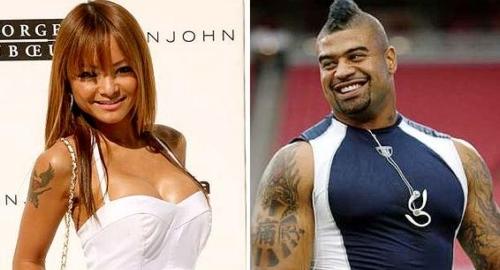 Tila Tequila, star of MTV’s “Shot at Love” and the 1996 blockbuster Independence Day, had her boyfriend Chargers linebacker Shawne “Roid Monkey” Merriman arrested over an altercation they had at his home this weekend.

According to Tila, the couple were arguing, then Shawne started choking her and refused to let her leave his house.

Shawne Merriman admits he did choke her but that was only because he heard she enjoyed “deep throating” and was confused about what the term meant. Also he says Tila was drunk and he did not think it was safe for her to drive, so he only restrained her to keep her from injuring herself or others.

Tila Tequila responded on Twitter today saying, “I am allergic to alcohol. It has been publicly known for years. That is how I got the name Tila ‘Tequila’ cuz the irony. I cant drink.”

I believe Tila. Of course her nickname is “Tequila” because she does not drink. She’s like my paraplegic friend “Walkie”, or that blind guy who runs a fruit stand by the freeway who I affectionately refer to as “Hawkeyes”.