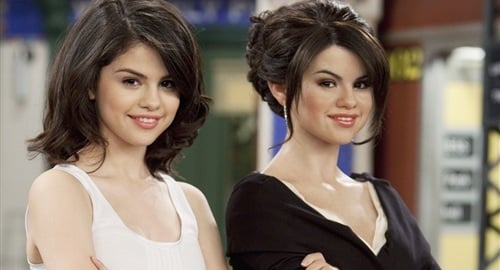 Selena Gomez has been reunited with her long lost twin sister Morteous Gomez, who she has not seen since she was an infant.

When Selena and Morteous’ parents, poor Peruvian banana farmers Jose and Maria Gomez, had the girls they were shocked when the village doctor told them that they were identical in every way except for one, one of the girls was pure evil.

The Gomezs quickly ascertained that Selena must be the evil one when they heard the child try to sing, and it sounded like Satan banging a goat. So they decided to sell Selena to the Disney corporation with the hope that she would end up being killed in one of their many child labor run coal mining operations. Unfortunately that never happened as Disney choose Selena to be the Latin face of the company to the ever expanding Hispanic illegal immigrant population in the US.

Now Morteous has come to America to reunite with her twin sister Selena Gomez after their parents were found hacked to bits and partially eaten in what the local police deemed a murder suicide. Sources close to Selena tell us she is thrilled to have her twin sister back in her life, and can not wait for them to move in together to her dream house out in the woods and start making up for lost time.

Sadly Selena’s cat Mr Muff Puff will not be moving with them as he was found decapitated in Selena’s bed shortly after Morteous arrived.