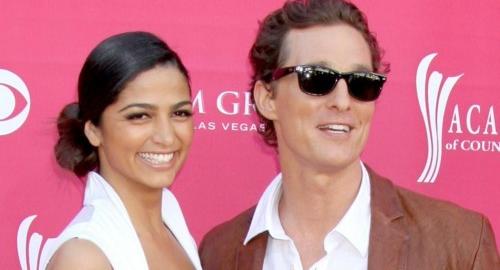 Matthew McConaughey announced that his girlfriend Camila Alves is expecting their second child.

“Happy Father’s Day. It’s my first, and the last 11 months with Levi and Camila have been the most rewarding adventure to date,” McConaughey writes. “We have more blessed news to celebrate this Father’s Day that [will] make this time next year double the fun. Levi is going to be a big brother.”

Yes the man named his first child after a brand of jeans. I wonder what product he is going to endorse with the 2nd one. My guess is Cheetos.

McConaughey continued, “Yeah, we pulled off the greatest miracle in the world one more time, Camila and I are expecting our second child, bringing more life into the world”.

So according to McConaughey the “greatest miracle” is something that pretty much anyone in the world can do and happens numerous times every second. Also if there is one thing the earth really doesn’t need it is McConaughey bringing “more life into the world”. This planet can only sustain so many self-entitled twits. Just ask Al Gore.