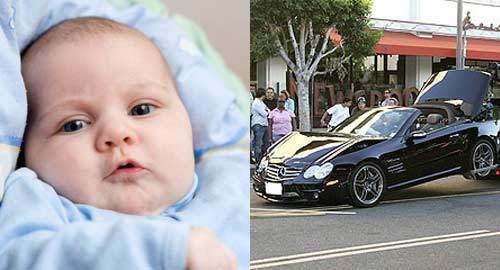 Kourtney Kardashian’s newborn baby, Mason Dash Disick, has checked into rehab. The announcement came just one day after Disick was born and only a few hours after he was cited for driving under the influence and cocaine possession.

On Tuesday morning at around 5:30 a.m., Disick crashed his 2009 Mercedes SL-65 convertible into a curb and shrub outside of a Los Angeles strip club. Disick, who had left the scene by the time police arrived, was hospitalized for minor injuries. Two passengers were not hurt. Later that day, Disick voluntarily checked into the Wonderland Drug and Alcohol Treatment Facility.

“Mason admitted himself to an intensive medical rehabilitation facility,” a publicist for the Kardashian family said in a statement Tuesday.

“Because this is a medical matter, it is our hope that the press will appreciate the seriousness of the situation and respect the privacy of Mason as well as the other patients receiving treatment at the facility.”

This is the second time this year that the 2-day-old has been in a treatment facility. In August, the then unnamed fetus checked itself into an outpatient rehab center in Malibu for an addiction to prescription painkillers.