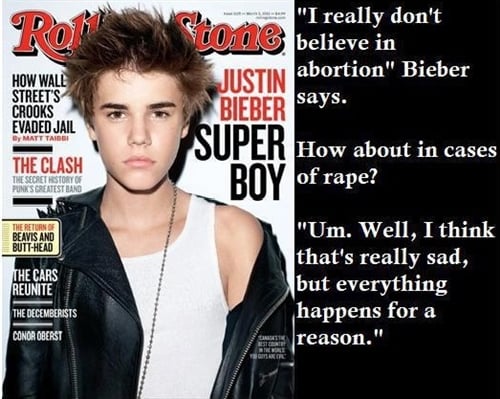 Justin Bieber shows wisdom beyond his years in an interview with Rolling Stone magazine in which he says he doesn’t “believe in abortion” even in cases of rape because “everything happens for a reason”.

Us Muslims couldn’t agree more with Justin Bieber’s views on these matters. Abortions are an affront to Allah as all life has value! If a baby is unwanted it should still be birthed. The baby can then be disposed of by serving as a vessel for an IED or by being shot out of a cannon at the infidel crusaders. In these ways the baby’s value is not squandered.

As far as rape goes us Muslims also believe as Justin does that it is “sad” that some men must dishonor themselves by having to force themselves upon women. In a perfect world we’d all have the self-control to first negotiate the woman’s purchase from a male relative even though they are obviously asking for it.

Yes Justin Bieber is showing himself to be a morally upstanding young man. If Biebs keeps down this righteous path he may find himself receiving the honor of getting his anus tickled while serving as a “dancing boy” for a virile Muslim man.