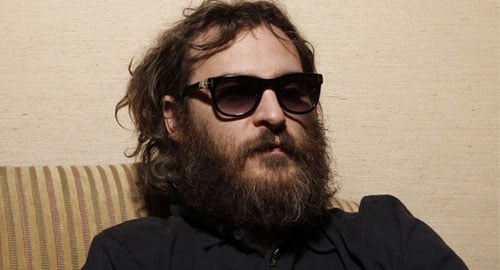 Joaquin Phoenix is now a superhero… or just a bearded hobo in a cape. Just in case you were just wondering what Joaquin Phoenix has been up to lately. The National Enquirer writes,

“It’s no hoax, folks – Joaquin Phoenix is one nutty fruitcake! The looney-toony star, dressed like a homeless derelict and muttering to himself nonstop, was spotted pawing through racks of clothes at Red Balls on Melrose, where he finally grabbed a black velvet cape, black trousers and mesh top, ducked into a dressing room – and began belting rap songs.

Emerging in his new outfit, he told the salesgirl he’d be wearing it home. Nervous, she asked: ‘What form of payment will you be using today, sir?’… then nearly jumped out of her skin when Phoenix banged down a wad of cash and yelled: ‘MONEY!’ Said an eyewitness: ‘He mumbled madly while the girl counted out his change and offered him a bag for his own clothes. Joaquin never said a word, rushed out of the store wearing his velvet cape – and dumped his old clothes in the nearest trash can!’”

I’m calling bullshit on this one though. The fact that his brother-in-law Casey Affleck has been taping his every move for a documentary makes it pretty clear that this is all just an act.

And I don’t know about you, but I know I always rap to myself while changing into mesh.