10 Things I Hate(d) About Heath 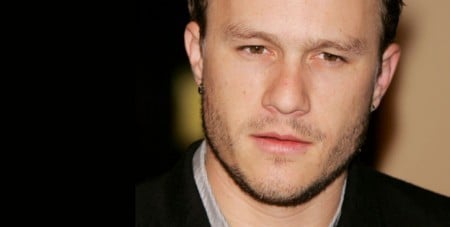 There are five stages of grief. When I heard that Heath Ledger had died I skipped stages one through four and moved straight on to stage five: acceptance. Apparently I was alone. It’s been well over a week since Heath caught the dragon, but I still have to listen to Mary Hart and her ilk droning on and on about the loss of my generation’s “Brando”.

Hey Mary, do me a favor and shut that well-worn anus you call a mouth. My generation’s “Brando” is alive and well. His name is Jake Busey.

Don’t get me wrong, I don’t really hate Heath Ledger. But when you hear Larry King, a man who hasn’t seen a new movie since Cocoon, pretending to care about this “tragedy”, something is wrong. World War II was a tragedy. Hurricane Katrina was a tragedy. Lipstick Jungle is a tragedy. But unless you are a friend or family member, Ledger’s death is forty-five seconds after the weather report and before sports.

In the end, the only one to blame for all this bullshit is Heath. So, without further ado I give you Ten Things I Hate(d) About Heath. Normally I wouldn’t kick a man when he’s down, but since I know he won’t be getting back up, why not?! ZING!

10. Ten Things I Hate About You (1999)
If you’ve made it this far you’re probably asking yourself when/why did I become “such a vile, hate filled, little man?” The answer to when; about the same time this shitpile of a film came out. Ten Things I Hate About You is horrible, and if you enjoyed it I’ll bet dollars to donuts that…A. you were in high school when it came out, and…B. you have a vagina.To answer the why, if you were in high school in the late 90’s, and you have a vagina I’ll also bet dollars to donuts that I did not see said vagina. You were too busy giving it up to guys that reminded you of Heath Ledger. Well he’s dead now, so fuck you! I win!

9. Upstaging Brad Renfro’s Death
Poor Brad Renfro. Not only did he die suddenly at the age of 25, but his family had to endure America’s collective “Who? Oh yeah, that guy!”

Then, to add insult to injury, just hours after they put poor Brad’s body in the ground along came old Heath to steal the spot light. Jesus, Ledger, you could have at least given him one day. Bad form.

Anyway, this one’s for you, Brad. Apt Pupil was pretty good.

8. Brokeback Mountain (2005)
Cowboys used to be the manliest guys around. John Wayne, Clint Eastwood, Yosemite Sam; there’s no question that those dudes enjoyed sex with ladies. Even the cowboy from the Village People couldn’t sway public opinion. Cowboys = Straight!

But not any more, pardner. Thanks to our dearly departed friend Heath Ledger cowboys are now gayer than George Michael blowing the ghost of Rock Hudson on the grave of Pedro from the Real World. It’s gotten so bad that I can’t even throw on a cowboy hat and a pair of assless chaps without someone cracking a Brokeback joke. Thanks, Heath.

7. He’s Foreign!
It turns out that Mr. Movie Star wasn’t even born in America. Sounds pretty un-American if you ask me.

Australia was a former penal colony, which means that for all we know Heath was the direct descendant of criminals. And unless his name turns up on all those pill bottles it would seem that apple doesn’t fall far from the tree. Zing!

6. A Knight’s Tale (2001)
Hey guys, lets take a film set in medieval England but use modern classic rock songs for the soundtrack!

That sounds about as entertaining as setting a Shakespearian play in a contemporary American high school. We’ll call it Ten Things I Hate’th About Thee. Oh, wait!

5. You Fucked Poor Terry Gilliam
Poor Terry. You screwed him over in a way Hollywood’s major studios never could. You filmed half of his latest dream project-gone-awry, and then died. Thanks, douche bag. Like Terry needed one more dead-end dream. The man deserves better! He was in Python! Way to go, Bruce, you stupid Aussie poofter .

Not anymore. I haven’t talked to my old man in five years, I haven’t paid my taxes in six, and seven years ago I had an abortion (it tasted like chicken).

I feel guilty enough as it is. Now, to make matters worse, I’m mocking the death of a man who by all accounts seemed like a decent human being. But what was I gonna do, not make a joke about it? I’m sick! I can’t not be an asshole!

Thanks for putting me in this position, Heath!

3. He may have fucked up the third Batman!
I’m not gonna lie; the new Batman movie looks pretty fucking sweet thanks in no small part to Heath Ledger. But now that he’s gone he can’t come back for part three. And to think, I was just about to forgive him for that travesty, The Patriot. Speaking of which…

Look, I’m no commie, I bleed red, white and blue just like the next jingoistic idiot. But any film set in 18th century South Carolina that has a plantation owner who only hires freed slaves is just too fucking much.

“We’re not slaves, we work the land…freed men.”

Why didn’t they just show Mel Gibson growing Fair Trade Coffee, or opening Ye Old Recycling Shoppe! It was the 1770’s! Fuck you!

1. Girls, Girls, Girls
Heath Ledger could have had any girl he wanted. Young, old, skinny, fat, alive, dead; it didn’t matter. The man could have tattooed the letters H, I, and V followed by a plus sign on his forehead, and he still would have gotten laid whenever he wanted.

Now, call me crazy, but if I had this power there is one thing I am positive I would not do: die. I know insomnia sucks, but at that point I wouldn’t take any fucking chances.

You can keep your dangerous sleeping pills, Dr. Asshole. I’m sure I can find something to do at night. Perhaps I’ll read a book, or maybe take up stamp collecting. Or maybe, just maybe I’ll fuck hot bitches one after the other until the sun comes up.

Way to blow it, dipshit.